My name is Daniela Paladi. I was born May 2nd 1964 in Lugoj, West Romania, a picturesque mid-sized town, where arts and music were high-lights.

Looking back on my childhood, I see myself, mostly keeping a pencil in my hand, trying to recreate my own little universe. Somehow this was the start of a "red thread" that kept running through my whole life: whenever I try to materialize my creative world of thinking, I start using pencil, colors and brushes.

The School of Arts in Lugoj (1974-1978) helped a lot to develop my artistic skills and to discover my insatious thirst for arts and architectural history, which I finally studied at the Dimitrie Cantemir University in Sibiu (1990-1993).

From my adolescence until now I had numerous exibitions, (solo shows as well as collective) throughout Romania and Germany.

My first success in designing was at the age of 14. While my mother, who worked for an inernational fashion firm, was commissioned to design a gala dress for a high-positioned lady in the romanian government, she decided for one of my sketches, that she then presented to her. 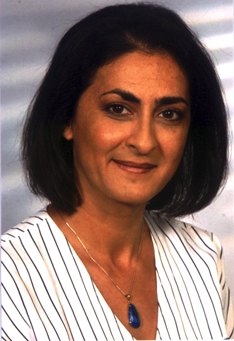 In the 1980s I started a long term collaboration (over 8 years) with the art gallery in my city, designing and handmaking very exclusives fashion items and accessoires (like earrings, bags, etc.).  For instance, in 1982 I designed my first jewellery set. My first fashion parade took place in Hersbruck, Germany, on 8th march 1997. Hersbruck has been my new "sweet home" for 25 years) .

For the last 10 years I have been collaborating with a company, which is one of the oldest in manufacturing high quality pencils. For more than 152 years and in the fifth generation, Comet Denecke has traditionally been producing highest-quality pencils - 100% Made in Germany. The manufacture of wooden pencils began in Nuernberg, Bavaria, as early as 1662. Emil Mahla, who founded the company to later be called Denecke, was the pencil supplier at the court of Ludwig 2nd. In this collaboration with Denecke I was introduced to all the secrets of pencil making and its history and I fell in love with it.

Following the concept of the synergy between tradition and modernity brought me to the idea of creating a collection of pencil extensions in an exclusive and luxurious design.

Around January 2011, a new collaboration was born. Wolfgang Luh, an internationally established artist, designer and cultural ambassador in Latin America, invited me to participate to a bilateral project between Germany and Argentine called "Black and White", having the unique theme "The Pencil". 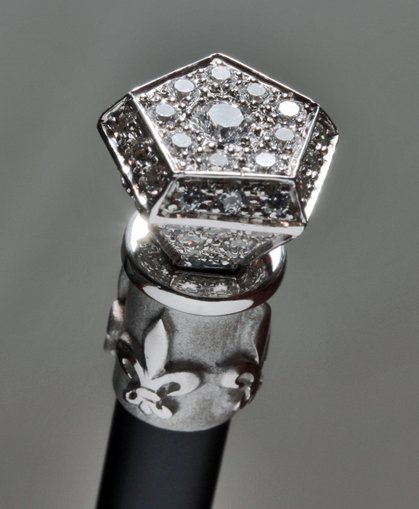 In July 2011, the Derwent Company offered me their collaboration and gave me the honour to create a Royal design pencil for Queen Elizabeth II's Diamond Jubilee. This Royal pencil eventually consisted of a hand-made wooden pencil, a graphite filling from the few locally available reserves and a decorative cap. The six facets illustrate the six decades of governance, the sixty brilliants represent the sixty years on the throne and the lillies symbolize the kingdom. The whole object in its complexity resembles a miniature sceptre. The jewel was made of white gold and diamonds.

My "golden hand" in manufacturing these items is Mario Pietrolongo, a very talented goldsmith of italian origin. He lives and works in Pforzheim, the "Mecca" of the German jewellery sector. His understanding of materializing my ideas is simply fantastic and I have no words to express my appreciation for his engagement, talent and enthusiasm.

After the royal house accepted, one of two world-wide existing originals of the pencil was premiered at the Messe Frankfurt in late January 2012, on the occasion of the 180th anniversary of Derwent factory. Personalities from the whole world were present. Shortly thereafter the gift was solemnly handed to the Queen of England.